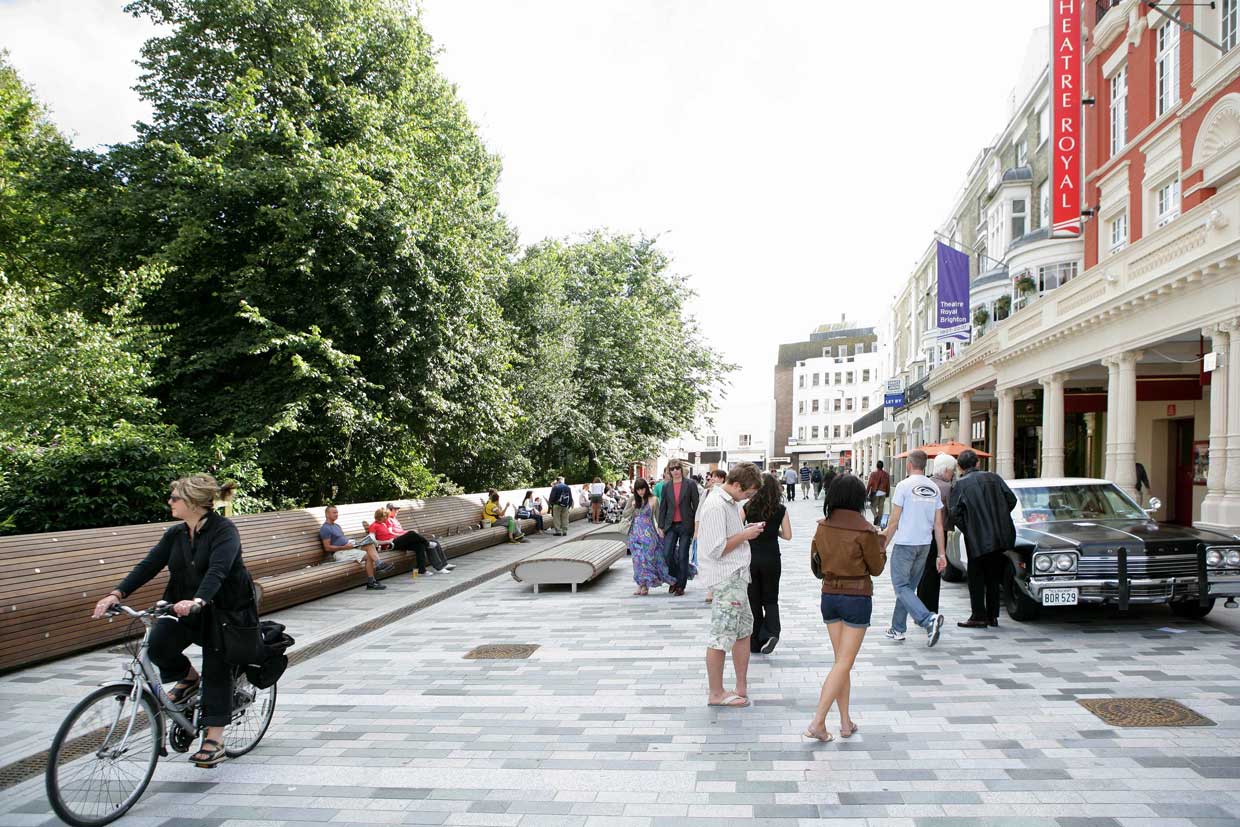 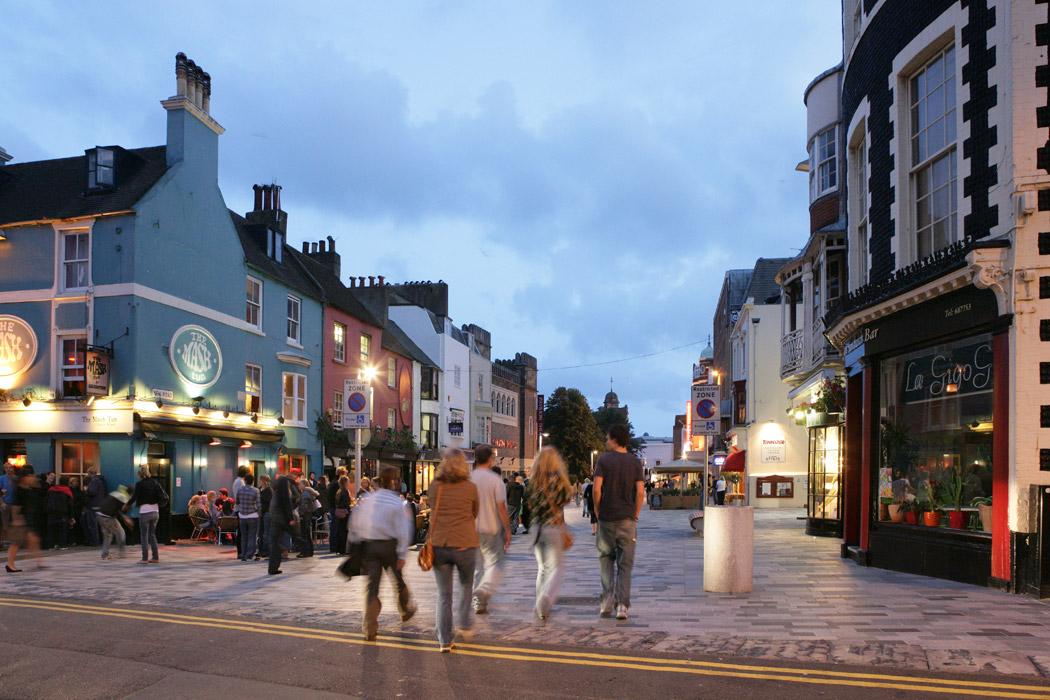 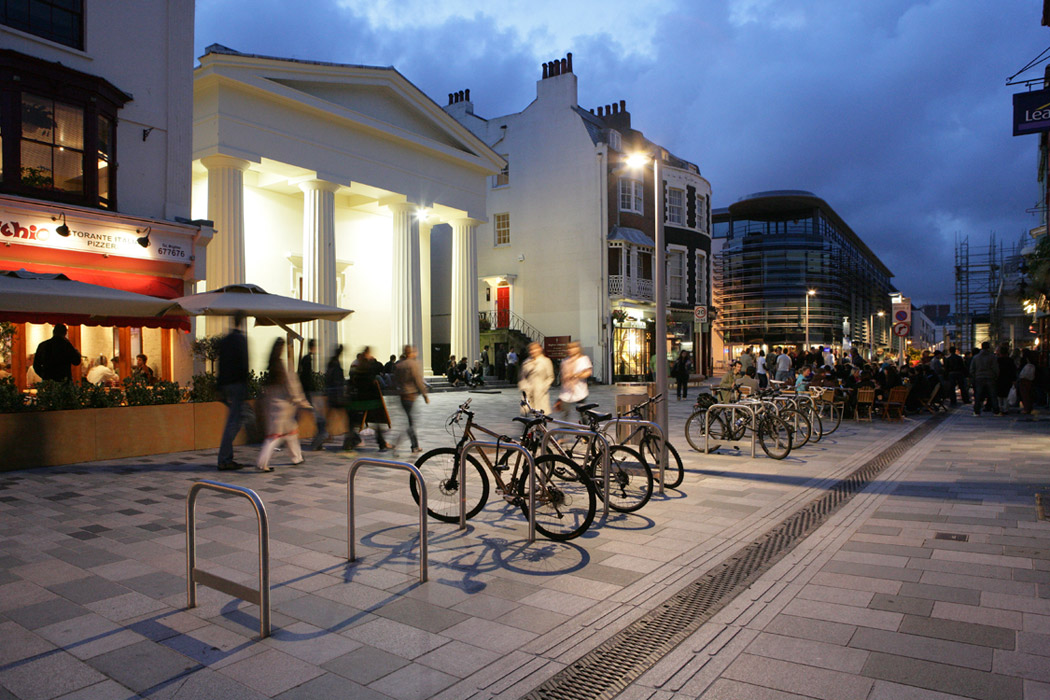 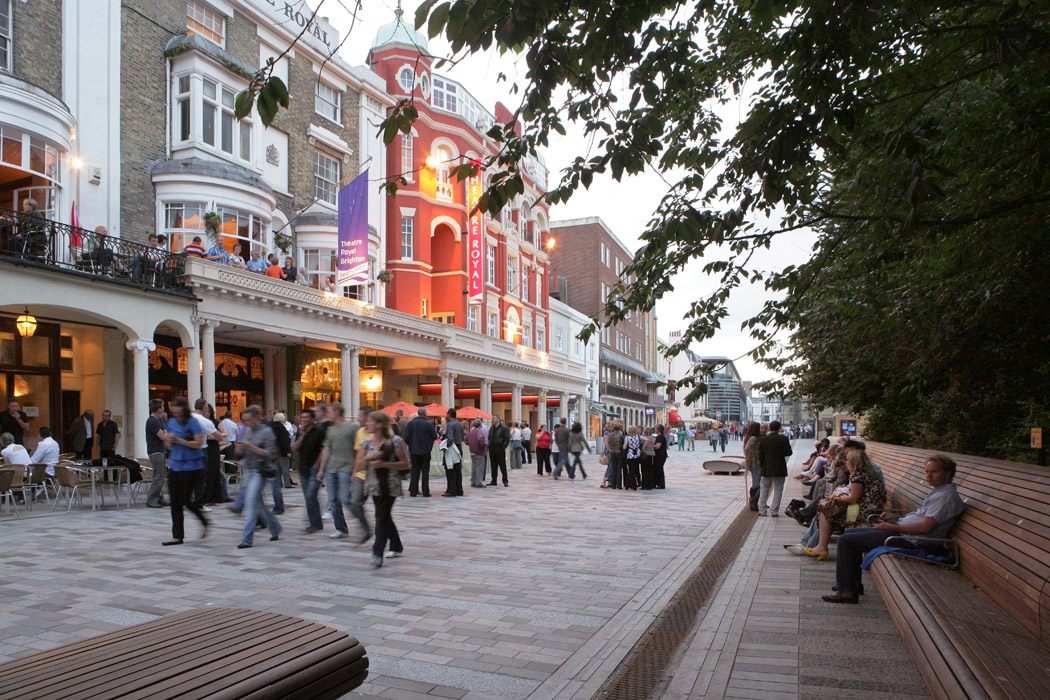 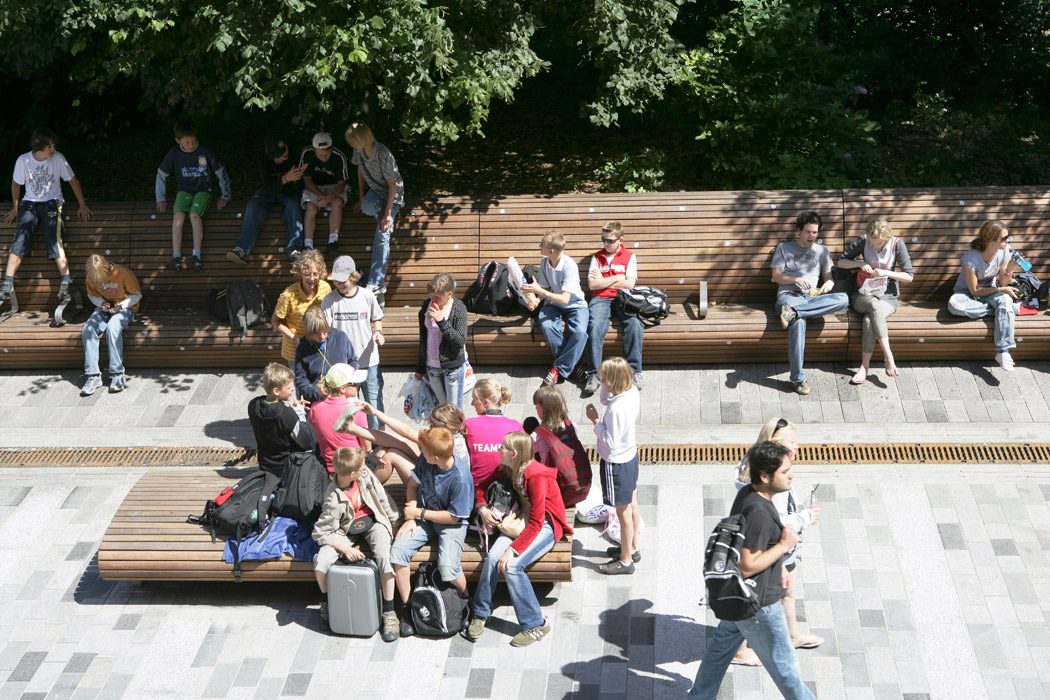 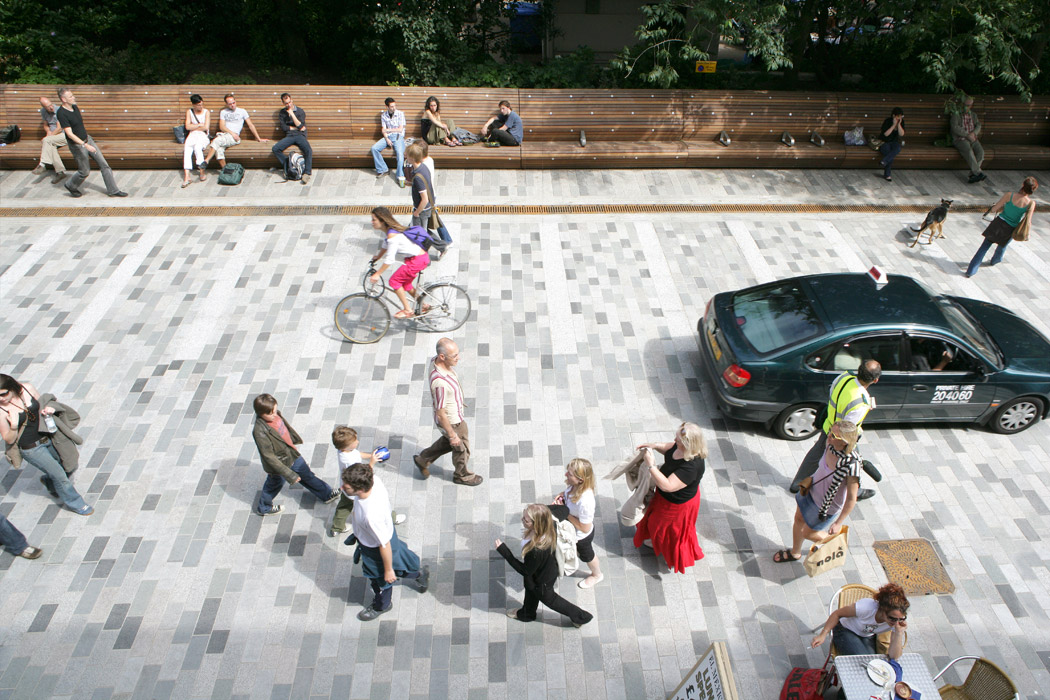 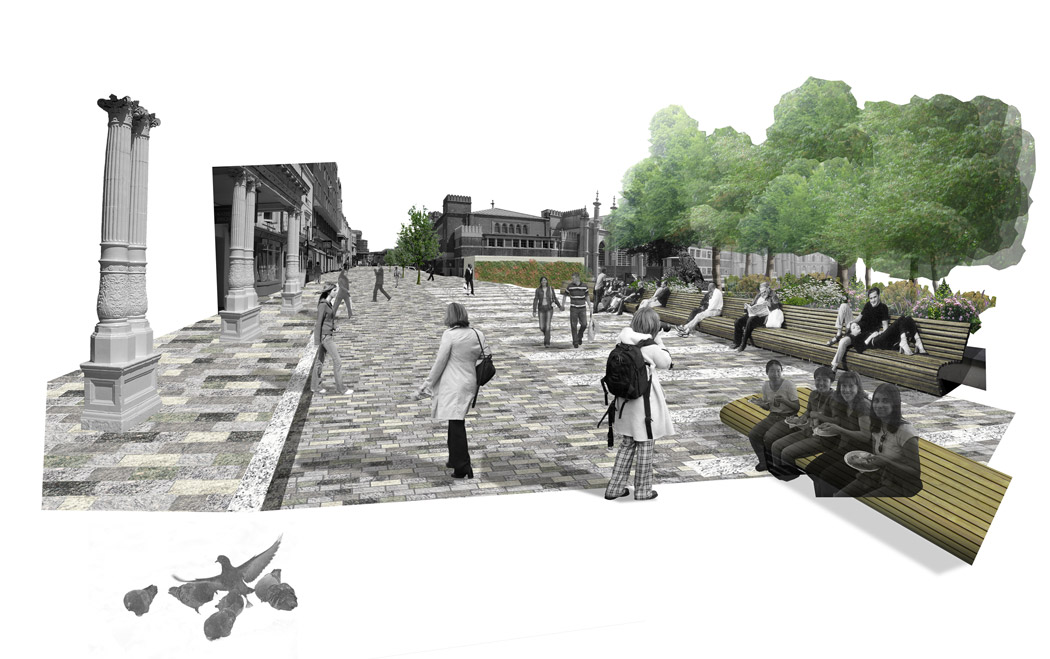 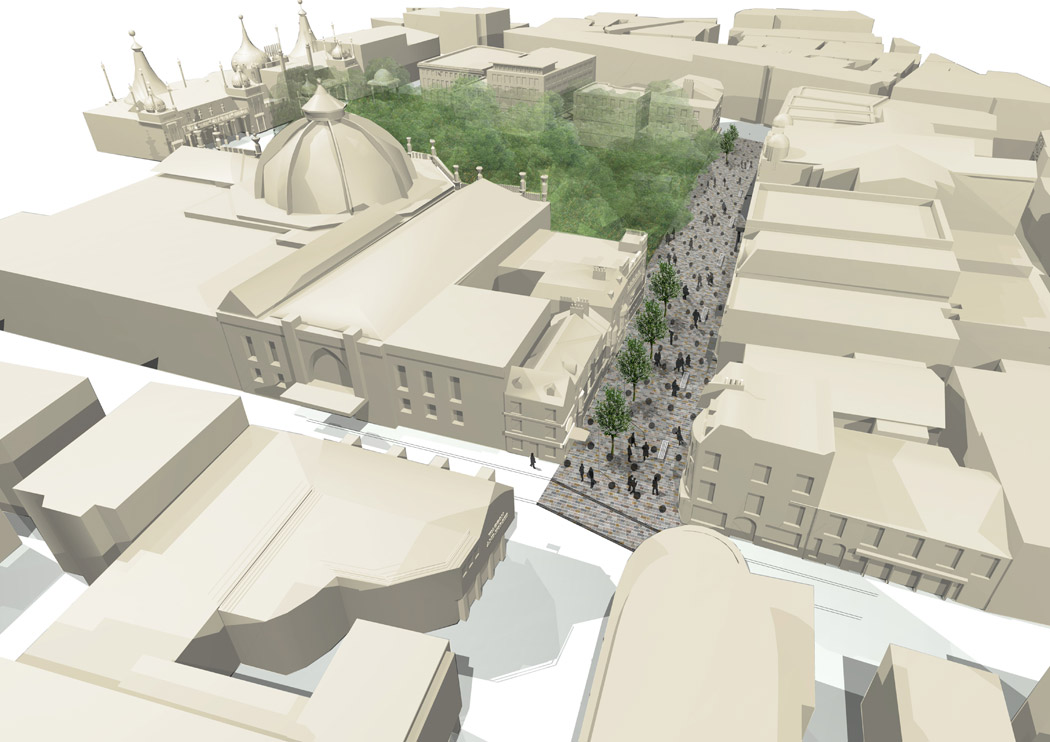 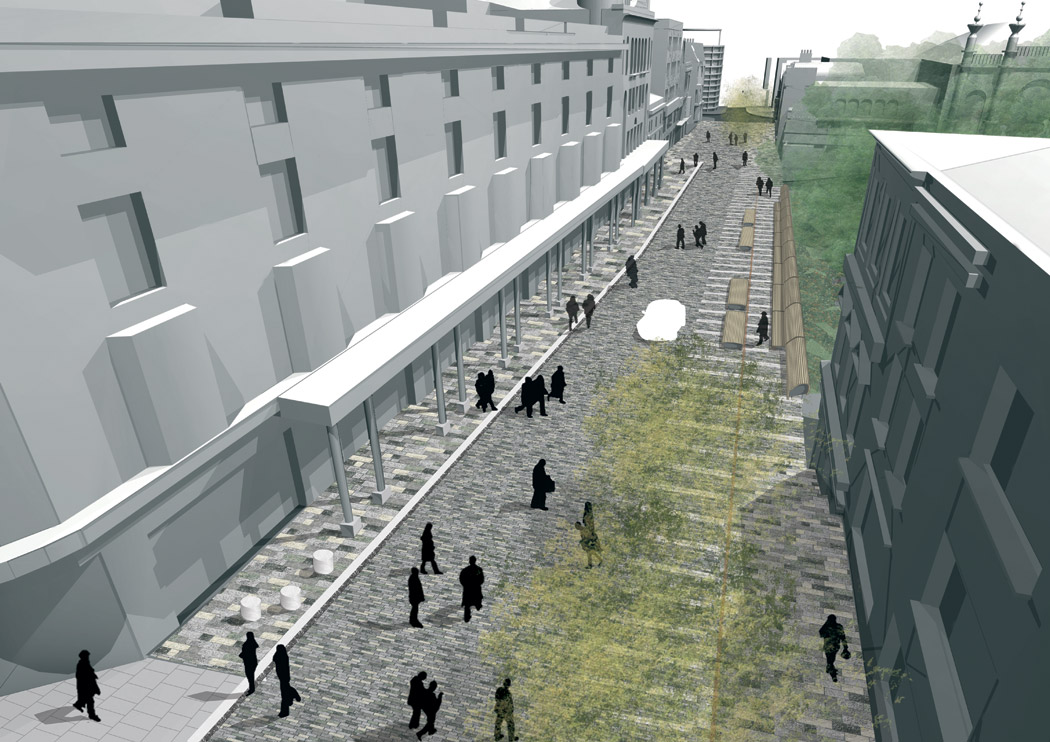 The new street design forms part of the city’s cultural mile: a connective public space linking the principle cultural institutions of the city.

Landscape projects: the city of Brighton & hove has a world-class reputation for its creative, leisure and cultural industries, and attracts millions of visitors. It’s dramatic setting, sandwiched between the sea and south down, constrains access and perceptions of the city. As a result, parts of the city are relatively inaccessible and ignored; other areas suffer overwhelming traffic congestion. Landscape projects, working with Gehl Architects from Copenhagen, were commissioned by Brighton and hove city Council to assess its pedestrian and visitor experience: its public realm improvement projects which would result in a more walkable, relaxed, attractive and accessible city. The most significant project to emerge from the study is at New Road: a street laid out in the early 19th century to a connective public space linking the principle cultural institutions of the city.

Over the last century, New road became increasingly rundown dominated by the needs of vehicles rather than people. To that end, the initial brief from the client was to close the street to all vehicles; to reclaim the street and create a pedestrianized linear square for sitting and eating and drinking and watching. However, the unique condition at the site ensured the brief evolved alongside the design; informed by a detailed understanding of how people use the street and the surrounding theaters, restaurants and the grade 1 listed Brighton Royal Pavilion and its gardens.
Using methodologies devised by professor Jan Gehl, the team collected information on who used the area, where they stood and how they moved in and out of the street.

We talked with local people and councilors about their aspirations and about how they used and understood the street; with traders associations about their fears of removing vehicles from the street; and with the various cultural establishments in the area. The new plan for the street incorporated the needs of all the different user groups: encouraging cycling, sitting, standing and walking activities based on prioritized public space programming. The new arrangement which responded directly to people using the street would be a shared space; a pedestrian dominated space where all vehicles were allowed.

The street has a vibrant nighttime use the surveys showed the highest pedestrian numbers were actually at night; so the design responded to the pattern, identifying lighting as a key component. Functional lighting along the street was complemented by the involvement of a lighting artist. the centerpiece a finely crafted, long bench gave a well-needed place for people to linger in the street.

The project has transformed this part of Brighton city centre, making a socially and environ- mentally sustainable public realm which is contributing to the city’s thriving economy. It has cemented itself as one of Brightons most important public places, becoming the fourth most popular place for people to spend time in the city, just behind the beach. since its opening, traffic levels in the street have dropped by 93%, whilst cycling and pedestrian numbers have risen by 22% and 162% respectively. english partnerships selected new road as an exemplar project for its urban design compendium, whilst the project was lauded by cabe, and won awards from the civic trust, the national transport award for urban design, the landscape institute and the british stone federation.